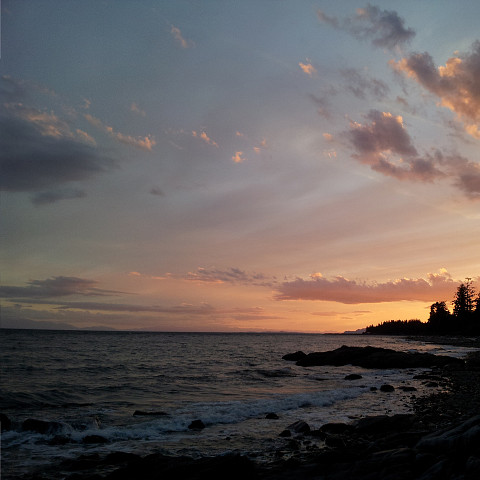 As Souns, Michael Red’s Coastal project was born out sub-bass frequencies he started hearing on the Sunshine Coast of British Columbia after taking up part-time residence there in 2011. The source of these frequencies is unknown and part of what appears to be a global mystery.**

As a whole, Coastal plays like a collection of field recordings with a few brief human interactions injected into otherwise natural, magnified sound environments. Coastal was pieced together from hours worth of recordings, selecting the most musical moments when the environment spoke the strongest and the unknown bass frequencies were the most dynamic.

The project starts with unedited field recordings of bass frequencies found on the coast. Different equalizer settings are used to show the frequencies in varied contexts, aiming to give a more complete picture of it’s nature by using different perspectives. Some of the bass tones are heard modulating or slowly shifting in volume and pitch. Coastal starts to meander, about half way through, into other field recordings from the same location and introducing more human involvement (such as striking wind chimes in a room, and a few instances of minor editing) while attempting to remain rooted in a perspective of observation. The project closes with a response of sorts, aiming to ground or make sense of the preceding material, while also reflecting the uncertainty and sometimes “deer in headlights” effect that the mysterious bass frequencies can create.

Prior to listening, it is recommended to set the optimal volume for playback on your device. This can be achieved by playing Track 2 and adjusting the volume to a level that is comfortably very loud. It is also intended that you listen to this album as one long piece by playing all tracks in order, non-stop, with zero seconds between the tracks (download the files, and adjust media player settings as needed). The total playing time is 44 minutes, including a pause of 13 seconds after the last track finishes.

All source sounds were recorded using a Zoom H1 recorder on the Sunshine Coast of British Columbia in 2011 and 2012.

The human element is largely absent in the majority of these tracks, with the exception of the Chimes and Heart tracks. What might sound like a person moving around in a room is more likely a “house sound”; a bass tone sounding like a car driving in the distance is more likely an unknown bass frequency (common to particular locations on the Sunshine Coast**); what might sound like conversation on a television in the background is most likely rain hitting a metal chimney.

Shimmer is the only track where time has been stretched (it’s a stretched out and reversed recording of the same chimes that appear earlier). As for the rest of the tracks: no other time was altered, pitched, or reversed. With the possible exception the Chimes tracks, the linear sequence of all source recordings is preserved (no segments of time were re-ordered within each track). Some looping occurs in the Chimes tracks, and there is a singular occurrence of a long tail reverb used at the very end of Lighter and Chimes. Aside from the Chimes tracks, EQ is the only effect used on the raw source recordings. It could be said that volume is used as an effect as well.

A lot of focused listening was put into adjusting the relative volumes of each track and overall pacing of the entire piece. The timing of changes and sound events is down to fractions of a second in some places. There is an implied rhythm from beginning to end.

** For more information on the unknown bass frequency on the Sunshine Coast and elsewhere in the world, start here.

** Coastal photo looks onto the body of water containing a maritime test facility, CFMETR (one of the possible sources of low frequency waves).